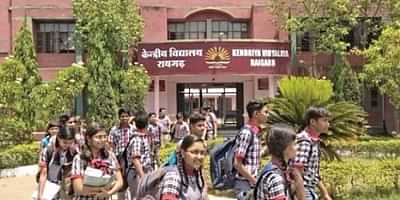 Dindugal: Members of Parliament especially from Tamil Nadu shocked on hearing suspension of MPs Special Dispensation of Kendriya Vidyalaya Coupon which turns them embracing situations as they could not get admitted students in Kendriya Vidayalaya under their special quota.

The policy of Tamil Nadu not allowing three language formula and there are very limited CBSE schools in the state which are mostly run by Political and Business people. The fees for these schools about Rs 10,000 to 25,000 per month as per standard and status of schools.

In addition to, parents are asked to deposit donations and development fee .Comparing this, Kendriya Vidayala is almost negligible fee, comes around eight to ten thousand per year without any additional fee.

Besides, K V standard is higher than private schools and pass percentage is nearing 98 to 99 per cent every year. This attracts people want to admit their children in KV schools in recent years.
As per criteria of KV Admission, It is meant for Government employees who are on  transferable jobs. The Education Minister also reiterated that Education is in State SUBJECT, the KV and Navodaya Vidyalaya are started to help Central Government employees and other State, PSU employees whose children education not to disturb on frequent transfer.

There are reservations for Government employee, Army, SC, ST and Single girl child, EWS and physical disabilities. There are only 10 seats out of 40 marked as General Category.

It being so, there are huge demand for.KV admissions. There are a few probabilities in getting Admission in First standard. However, the Admission on 2nd and more only on vacancies which is mere impossible to get admission. This turn people to find out alternative route for getting Admission in Kendriya Vidyalaya. Many of them approaches Constituency Member of Parliament to get Admission under the MP Quota. In recent years MPs also turned to get more admissions to children as it is lucrative. The common people were ready to sell out lakhs to get Admission in KVs
The Member of Parliament though not directly involve seeking money for KV admission it is their assistants and relatives involved in selling seats under MPs quota. Whoever approach MP for admissions in KV, they were replied that the name already selected and given. It is seven years back, the KV seats were sold at thousands, now it is in lakhs. Before scrapping Minister Discretionary quota of KV Admission,  MPs  especially from Tamil Nadu approaches Minster offices with a long lists to get Admission mentioning the relatives, family members and poor constituency people. There are  several MPs and PAs  step up in Education  ministry and approaching officers and personal Secretaries of Ministers. It gets uglier that there were scam in list recommended by MPs. A major portion of  Minster quota marked only in Tamil Nadu KVs. It is worth to Mention that there are star KVs like IIT Madras, KV Sulur and Madurai KV- I, the rate for these KVs almost triple Comparing to other KVs. The Minister quota of KVs raises each and every year. The period of KV Admission  is a head ache for Minister of the Education  Ministry. Even the minister threatened to  discontinue of such quota. However due to political pressure not taken such steps. The CBI also conducted enquiry  in KV Admission rackets in which Minsters personal assistants  PA s of TN MPs were  involved in recent past.

Meanwhile, it is doomed the numbers of KV admissions under Minister Quota , there were several  complaints against the Minister office, resulted dropping of Education Minister from the cabinet during the recent reshuffle. When Dharmendhra Pradhan took over the Education Minister, he was under pressure to clear Minister quota list prepared by earlier Minister. Under the intervention of PMO, the Minister Discretionary quota scrapped last year.

Many MPs especially from south, as the KV schools are lesser than North, really disturbed scrapping of Minster quota. Many PAs got advance payments for Admission in lakhs, the scrapping of Minister quota was rude shock, they were pacified will provide Admission in KV under MP Quota this year. It resulted huge demand for MPs Coupon and the rate skyrocketed from five to ten  lakhs depending upon the school. Many of aspirants gave advancement to MPs Coupon.

During the recently concluded budget session, the Congress MP Manish Tiwari raised the matter in Lok Sabha and requested to raise the quota limit upto 50 else scrap the Discretionary quota of MP.
The Government quick to responding to cancel the MPs Dispensation as it is meant for only Central Government employees and will take decision after consulting all party Members.

The nightmare of South MPs especially TN MPs started as they were under tremendous pressure to give out last year backlog they want pillar to post that not to scrap the MPs Coupon. The time and again MPs raised the issue of status of MPs Coupon on KV Admission. However the government not giving direct answer, simply said that the issue is under consideration. Meanwhile the Budget Session ended in one day before, scheduled on 7th April.

Many MPs were in education ministry and enquired on the scheme. The rude shock came on 12th April in which the KV Sangathen written letters to Principals of KV Schools informing them not to admit students under the MPs Special dispensation until further orders. It made the MPs dejected and desperate to how to handle the public.

The neighbouring states Kerala,  Andhra,  Telengana  and Karnataka are following three language formula and Hindi also  taught in state schools. The Tamil Nadu not allowing students to take Hindi even as voluntarily causing the students facing hardships in facing national exams like NEET, JEE and recently started CUTE for admission in  central universities. The Government is for the people and by the people and to the people. It is wise that revising of subjects at Parwich National level and not to allow their ideologies  on young students.