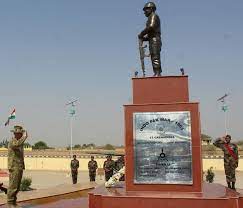 On arrival at Laungewala, the Australian COAS was received by Lt Gen Rakesh Kapoor, GOC, Desert Corps after which he paid homage at the Laungewala War Memorial in memory of the fallen heroes of Indian Army in the Indo-Pak war 1971.

He appreciated the efforts of Indian Army in creating and maintaining the ‘War Memorials’ and establishing a bridge for common man’s outreach to witness the values and valour of the Indian Soldier.
Lt Gen Richard Burr also visited the Pokharan Field Firing Ranges where he witnessed a demonstration of indigenised weapons platforms executing operational manoeuvres in a combined arms firing exercise involving Armour, Artillery, Infantry and Aviation assets.

The visiting General complimented the robustness of the Indian soldier and his ability to operate in varied terrain and difficult conditions, across various spectrums of engagement.