Ban vs WI, 2nd Test: Honours even after Bonner hits half-century on day one 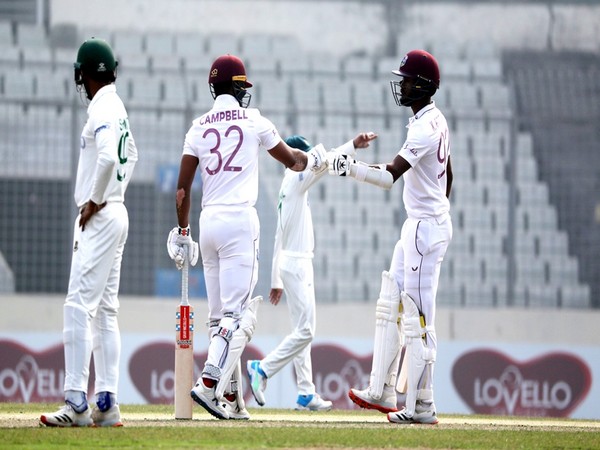 Dhaka [Bangladesh], February 11 (ANI): Nkrumah Bonner’s hit an unbeaten half-century on the opening day of the second Test against Bangladesh to help West Indies recover from the blows on Thursday.
At stumps, the West Indies score reads 223/5 with Bonner and wicket-keeper batsman Joshua Da Silva unbeaten on 74 and 22 runs respectively with the game evenly poised.
West Indies were reduced to 176 runs for the loss of five wickets but an unbeaten 45-run stand between Bonner and Silva took the visiting side to 223/5 before the close of play.
Bangladesh made three changes in the playing XI from the first match. Soumya Sarkar, Mohammad Mithun, and Abu Jayed Rahi came in the side replacing Shadmad Islam, Shakib Al Hasan, and Mustafizur Rahman.
Winning the toss, West Indies opted to bat first. Captain Kraigg Brathwaite backed up his decision with a solid 66-run opening stand with John Campbell.
Both the batsmen looked dangerous but their partnership was broken by Taijul Islam who removed Campbell for 32. After the lunch break Tigers put more pressure on the visitors as they lost three quick wickets and were eventually reduced to 116 for 4.
Since then Bonner and Blackwood fought-back with a 62 runs stand for the fifth wicket. Taijul again came to the rescue as he dismissed Blackwood for 28.
Bowlers created a couple of chances before the end of the day’s play but failed to break the partnership between Bonner and Joshua. Bonner remained unbeaten on 74 and Joshua was on 22. Abu Jayed and Tajul both claimed 2 wickets each.
Brief Scores: West Indies 223/5 (Nkrumah Bonner 74*, Kraigg Brathwaite 47; Abu Jayed 2-46) (ANI)

Power2SME Signs MoU with Directorate of MSME, Government of Haryana