Despite my ‘own unorthodox style’ a lot of youngsters seek advice: Afridi 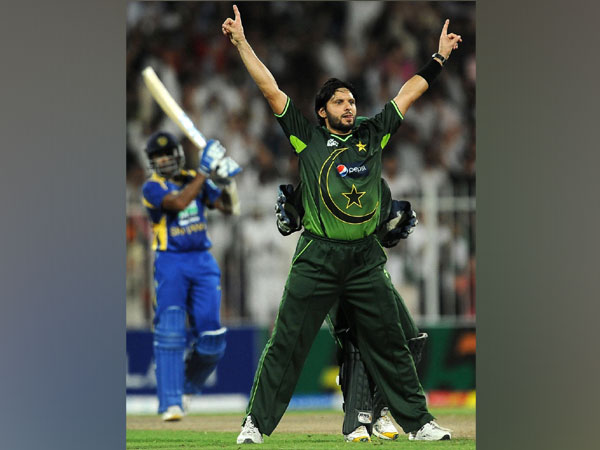 New Delhi [India], December 1 (ANI): Be it with his match-winning performances on the pitch or his headline worthy statements off it, Shahid Afridi is one character who is loved by cricket fans across the globe irrespective of national boundaries. And if anyone thought that the current generation might miss growing up to his showmanship on the pitch, the Galle Gladiators skipper has made it clear that he is here to stay.
Speaking to ANI on the sidelines of the Lanka Premier League (LPL), Afridi threw light on the desire to still get onto the pitch and perform, the need to return to normalcy in the post-COVID-19 world, need to see Indian and Pakistani players playing in each other’s T20 league, memories of playing for Deccan Chargers in the IPL and most importantly the effect social media can have on relationships between players from India and Pakistan. Leading Galle Gladiators’ charge in the LPL, Afridi is not just a senior member of the team, he is also expected to mentor young talent during the course of the league. And the 40-year-old is glad to pass on the experience he has gained from playing 27 Tests, 398 ODIs and 99 T20Is for Pakistan.
“It’s a new league and from the Sri Lankan point of view, a very important tournament for the growth of the game in the island nation. It is a huge step forward and I am quite confident it’s going to be a great event. In tournaments like this, we have to make sure to help some of the young players grow. There are some good local talents also and I want to contribute in whatever way I can. It is always fulfilling to give something back to the game,” he said.
So does that mean he could turn to coaching in the next couple of years? The talisman makes it clear that he is open to mentoring, but coaching is not something he has given a thought as he is still enjoying playing the game.
“I haven’t thought about taking up coaching as a full-time job yet because there are still some people who want to see me play. And right now, I am also enjoying playing the game as much as I did when I played for my country. As far as mentoring the youngsters are concerned, I am always available for anyone who comes up to me for advice. And despite my ‘own unorthodox style’ a lot of young cricketers come seeking advice when I play for different franchisees,” he pointed.
While the LPL has seen a few players pulling out, Afridi wants to look at the positives and how it is important to get back towards normalcy in the post-coronavirus era.
“I won’t like to comment on the pull-outs, but, it is indeed important to make a start. The game of cricket was stopped for a while following the pandemic outbreak, however, we have seen that people are adapting to the new normal and have successfully organised sporting events with all necessary precautions in place.
“Hats off to the Sri Lankan government, the Sri Lankan Cricket (SLC) board and the Innovative Production Group (IPG) for putting this event in place. I am sure, it was difficult, but that was the right thing to do for the fans, the game and for the people of Sri Lanka,” he said.
Former Pakistan skipper Wasim Akram recently spoke about how he wishes youngsters from both India and Pakistan could be a part of the IPL as well as the Pakisatn Super League. Afridi echoes the sentiments.
“I completely agree to what Wasim bhai said, and that must be the sentiment of many on either side of the border. It will be a really big step forward for cricket and cricketers of both countries if that happens,” Afridi said.
While T20 leagues have become a rage now, it first came into limelight with the IPL in 2008. Having played for Deccan, Afridi said he has some good memories from the league.
“Oh yes! I have some good memories of that time, played for Deccan Chargers and we had a good team back then. Adam Gilchrist was the captain and there were VVS Laxman, Rohit Sharma and Andrew Symonds. But for some reason we couldn’t live up to the expectations of the fans in that season,” he pointed.
A conversation with Afridi is never complete without discussing his war of words on the social media with some former India cricketers. Asked if he believes the social media sometimes has a role in ruining bonds, the cricketer did not wish to comment on the same.
“I have huge respect for all of them and I also shared a very good rapport on and off the field with them for a long time. We have not met or talked recently but I don’t think it has changed. I sincerely don’t want to comment on what goes on in the social media,” Afridi signed off. (ANI)