-Most Spirited Ship trophy was awarded jointly to INS Satpura and INS Kora, Admiral R Hari Kumar was the Chief Guest for the Awards Function 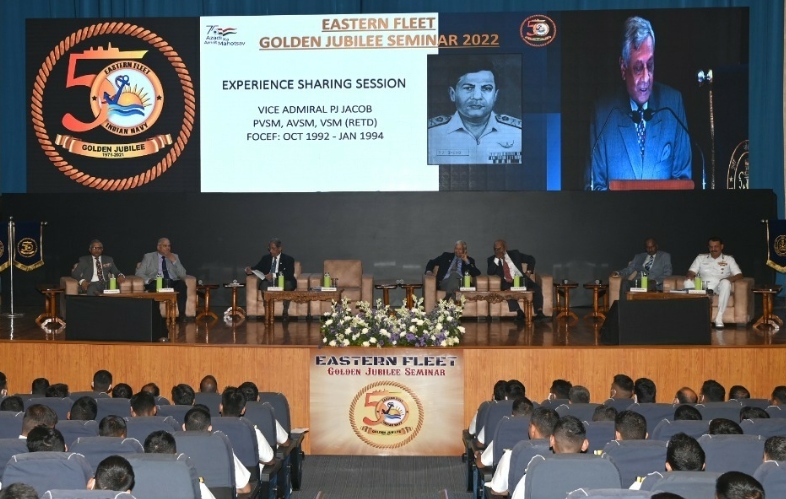 Visakhapatnam/New Delhi: The Eastern Fleet commemorated its Golden Jubilee on 06 and 07 Apr 2022 at Visakhapatnam with a host of events. The major highlights of the celebrations included a Wreath Laying Ceremony, a Seminar themed ‘Emerging Challenges in Eastern Maritime Theatre – Future Readiness of Eastern Fleet’, an Awards ceremony and interactions with Fleet personnel and their families.

As part of the Golden Jubilee celebrations, a documentary encapsulating the growth of the Eastern Fleet since its formation in 1971 to its present position of eminence, was also screened. The events were attended by 14 former Fleet Commanders, besides a large number of Flag Officers, officers, sailors and their families.

The Fleet Awards Function 2022 which recognises achievements and excellence achieved by various units of the Eastern Fleet in 2021 – 22 was held on 07 Apr 2022 to coincide with the Golden Jubilee celebrations. Admiral R Hari Kumar, Chief of the Naval Staff was the Chief Guest for the Awards Function hosted by Rear Admiral Sanjay Bhalla, Flag Officer Commanding Eastern Fleet. INS Shivalik was adjudged as the Best Ship of the Eastern Fleet. INS Kadmatt was adjudged as the Best Corvette, and the Most Spirited Ship trophy was awarded jointly to INS Satpura and INS Kora.

HC order – licence must to play music or sound recording at…