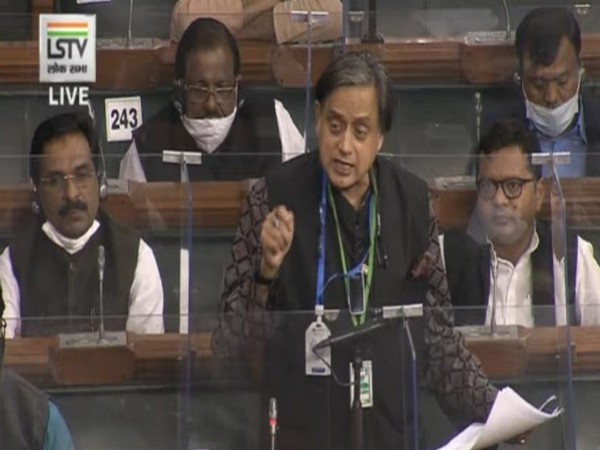 New Delhi [India], February 10 (ANI): Congress MP Shashi Tharoor on Wednesday said that the central government’s Union Budget 2021-22 deceived people with respect to the allocation in defence and health sectors.
During the discussion on Union Budget in Lok Sabha, Tharoor said that the time will come soon when banks will have to provide fuel loans.
“In the Union Budget health, fiscal stimulus, defence and agriculture have been particularly let down. The government has come out with a budget which deceives people with respect to the allocation in defence and health sectors. Lal Bahadur Shastri had said ‘Jai Jawan Jai Kisan’. The contribution of this budget is ‘Na Jawan na Kisan,” said Tharoor, Lok Sabha MP from Kerala’s Thiruvananthapuram.
“The Finance Minister said the allocation was 137 per cent on the previous year but she did not keep her word. The Budget is a betrayal of our health care workers who worked tirelessly through the pandemic. Budget allocation for the defence this year is only 0.4 per cent over last year. It is a matter of shame that we have a government that has proven consistently that it is unwilling to support our armed forces,” he added.
Terming the Budget as “tepid budget”, Tharoor said that it ignored the middle class in their hour of need.
“This tepid budget ignored the middle class in their hour of need. No relief has been given in tax rates for the middle class. You have given an increase in fuel prices. The excise duty on petrol has risen by 348 per cent since 2014. Soon banks will have to provide fuel loans,” he said.
Commenting upon the agriculture, Tharoor said the budget does little to reassure farmers on Minimum Support Price (MSP).
Further, he said that the government has not provided diesel subsidy and it has ignored thousands of tea workers in Tami Nadu and Kerala.
“Any dreams Indians had of good days, was cremated at the altar of the disastrous decision of demonetisation,” he concluded. (ANI)