Health concerns shall precede over that of economy for post lockdown road map, says Vice President

Third week of lock down crucial for decision making on lock down exit. People should continue to cooperate with leadership’s decision even if hardship continues. Indians’ response so far for good of all highlights spiritual dimension of motherland.Tablighi Jamaat episode an avoidable slip, said Vice President.Global community shall draw right lessons from the Corona crisis, urges Mr Naidu 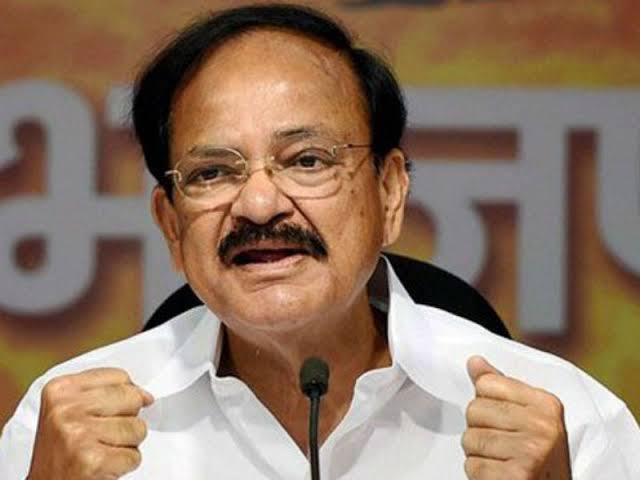 While the country’s leadership is seized of the way forward after April 14 when the 3 week national lock down in the wake of Corona virus crisis comes to an end and the basis of such decision is being debated, Vice President of India Shri M. Venkaiah Naidu urged that concerns about the health of the people shall take precedence over that of stabilization of economy.

In his assessment of the completion of two weeks of lock down today and the way forward, Shri Naidu opined that the next week will be critical for deciding on the exit from the present nation-wide restrictions in force from March 25. He said that the data regarding the extent and rate of spread of virus infection will have a bearing on exit strategy.

Referring to the consultations between the Prime Minister and Chief Ministers on the exit strategy, Shri Naidu urged the people to abide by whatever decision follows and cooperate with the same spirit that has so far been demonstrated even if hardship were to continue after April 14.

He expected that governments will ensure smooth functioning of supply chains and adequate relief and support for the vulnerable sections.

Recalling the overwhelming response of the people to the Janata Curfew on March 22, the nationwide lockdown since March 25 and lighting of candles on April 5, the Vice President stressed that it is an indication of the virtue of spirituality that forms the core of Indian ethos.

Elaborating on this, Shri Naidu said that spiritual salvation is all about annihilating self-centeredness and striving for the good of all and the people of the country have demonstrated this core value in abundance during this hour of crisis and such a spirit will help us in overcoming the challenge.

Alluding to the Tablighi Jamaat congregation in the national capital and its fall out when the efforts for flattening the Corona virus curve were bearing fruits, Shri Naidu said that it was an avoidable aberration and an eye opener to others.

The Vice President urged the global community to draw right lessons from the present crisis to effectively face the next imminent one by addressing the inadequacies in respect of effectiveness of INSTITUTIONS, INFRASTRUCTURE, INFORMATION SHARING, INTERNATIONAL COOPERATION AND INDIVIDUAL ACTIONS.

The following is the statement of Vice President Shri M. Venkaiah Naidu on two weeks of lock down and the way forward:

“As today marks the completion of two weeks of nationwide lockdown in force since March 25, I thought it appropriate to reach out to the people and the leadership of the country with my views and concerns amidst current efforts to tide over the crisis caused by the outbreak of Corona virus.

I am glad that the leadership including the Prime Minister and Chief Ministers have started consultations on the exit from the present lock down. I am certain that they will come out with the best possible solution in the context of the extent and rate of spread of this killer virus in different parts of the country. Between the considerations of the health of the people and stabilization of our economy being debated, the former shall take precedence over the later. In my view, while the concerns of economy can wait for another day, that of health can’t.

I appeal to the people to abide by whatever decision is ultimately taken by the leadership and cooperate in the ongoing national effort with the same spirit that has so far been evident even if it meant to continue with some degree of hardship still beyond April 14. I am sure the governments would ensure smooth functioning of supply of essential commodities and necessary relief and support for the poor and vulnerable sections.

The next one week of lock down is very critical for evolving an exit strategy since the data regarding the spread of virus and it’s rate during the next week will have a bearing on the decision to be taken.

The people of our country have so far demonstrated a very high degree of resoluteness in the true spirit of spirituality to collectively fight the challenge in the interest of all. Spirituality is all about annihilating one’s own interests and striving for the good of all guided by the principle of universality of humankind, which is at the core of Indian ethos.

The overwhelming voluntary response of the people of our country to the Janata curfew on March 22, nationwide lockdown since March 25 and lighting of candles and diyas in solidarity with others on April 5 are clearly a hallmark of this enlightened spirit of spirituality. I am confident that such an evident spirit will lead us to victory over the invisible virus. I sincerely compliment the people for the same.

Amidst our collective efforts against the virus showing signals of success in arresting the spread of Corona virus, came the Tablighi Jamaat congregation which had altered the nature of the curve with most of the new infected cases emanating from this meet.

The extent of participation in this congregation and it’s multiplier effect has upset our expectations. This avoidable episode highlighted the consequences of any slip by way of violating the rules of social and physical distancing to contain the spread of virus. In that sense, this avoidable aberration should only be seen as an eye opener to all others.

With several developed countries still struggling to tackle the corona virus, global community needs to draw right lessons from the present crisis. Deficiencies manifested in respect of effectiveness of Institutions, Infrastructure, Information sharing, Internal cooperation and Individual actions need to be rectified to effectively face the next imminent such challenge.

The duration of the fight against the virus may be uncertain at the moment but we shall triumph in the end. Wisdom lies in minimizing the costs to the health and wealth of the people across the globe. India has shown the spirit to do so and this need to be sustained till the end. Let’s live with the hardship a little longer for a better tomorrow.”