Mumbai (Maharashtra) [India], April 18 (ANI): Keeping it light for people amid COVID-19 induced lockdown, Bollywood star Ishaan Khatter on Sunday treated fans to a rib-tickling ‘Instagram Vs Reality’ video.
The ‘Khaali Peeli’ star took to Instagram and posted a video featuring his mother Neelima Azeem.
The video starts from a frame capturing a cute little ladybird climbing up to rock as Ishaan slides a flower with it, the next frame shows the actor playing with his cat followed by Neelima smilingly speaking about their house as she posed gleefully for the camera. The first half of the video has a hunky-dory theme.
The scene then changes to the second half, the ‘Vs Reality’ part where Ishaan is seen taking the camera to a room where his mom is seen shouting ‘why have you kept my chocolates out? Who asked you to do it? I want my chocolates now?”Ishaan then responds, “You have been eating one whole bar of chocolate, if not more a day, and I have found this out after a week, and now you are getting angry.”
Post which Neelima shouts in anger “Who are you? You are just my younger kid. Before my yoga, I want to have my chocolate.”
The actor says that he is concerned about his mom’s weight, and its unhealthy effects.
Taking to the caption, Ishaan wrote, ” Instagram v Reality (lockdown edition)ft. mia madre @neliimaazeem (the big and added baby emoticon).” 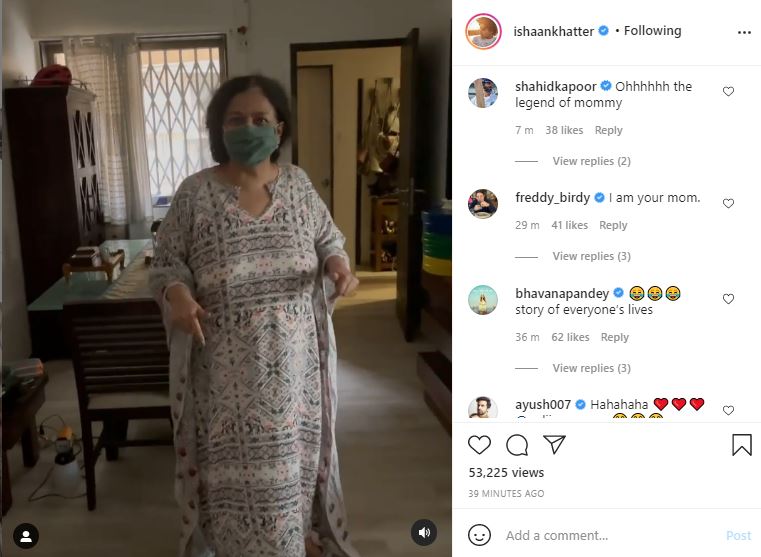 The video on the photo-sharing platform garnered 53 thousand views within 38 minutes of being posted wth Kiara Advani and Manish Malhotra liking it
Mira Kapoor chimed into the comments section, “Hahahaha WHO ARE YOU!”
Shahid Kapoor wrote, “Ohhhhhh the legend of mommy.”
Ishaan made his Bollywood debut in 2018 with ‘Dhadak’ alongside Janhvi Kapoor. Ishaan was last seen in Mira Nair’s ‘A Suitable Boy’ and also in Khaali Peeli alongside Ananya Panday, and the duo’s film has received positive responses. The actor has also been roped in for ‘Phone Bhoot’ also starring Siddhanth Chaturvedi, Katrina Kaid and Arjun Kapoor (ANI)