New Delhi [India], April 20 (ANI): Bollywood star couple Kajol and Ajay Devgn, on Tuesday celebrated the occasion of their daughter Nysa’s 18th birthday by penning down heartfelt notes for her on social media.
The ‘Drishyam’ actor took to his Instagram handle and shared a cute picture with his daughter, along with some words of wisdom in the caption, he wrote “Happy Birthday, dearest Nysa. Small joys like this are the only ‘break’ in stressful times like these,” wrote the actor referring to the pandemic in his post. He also sent out prayers for all those who have the coronavirus. He wrote: “Also, a sincere prayer for all those who need healing.”
In the photo, Ajay and Nysa can be seen standing beside each other, flashing wide smiles for the camera. While the birthday girl kept it stylish in a blue striped off-shoulder top, paired with denim, Ajay looked cool in his casual T-shirt and jeans look.

Kajol also wished Nysa on her birthday by sharing an endearing childhood photo with her little girl on her Twitter handle. Along with it, she tweeted, “Today, I can finally say I passed with flying colours. U are what we all say women should be. So fly high my darling and don’t tone down ur shine for anyone. I’ve got ur back! Happy Adulthood. You have the tools, so use your powers for goodWinking face.” 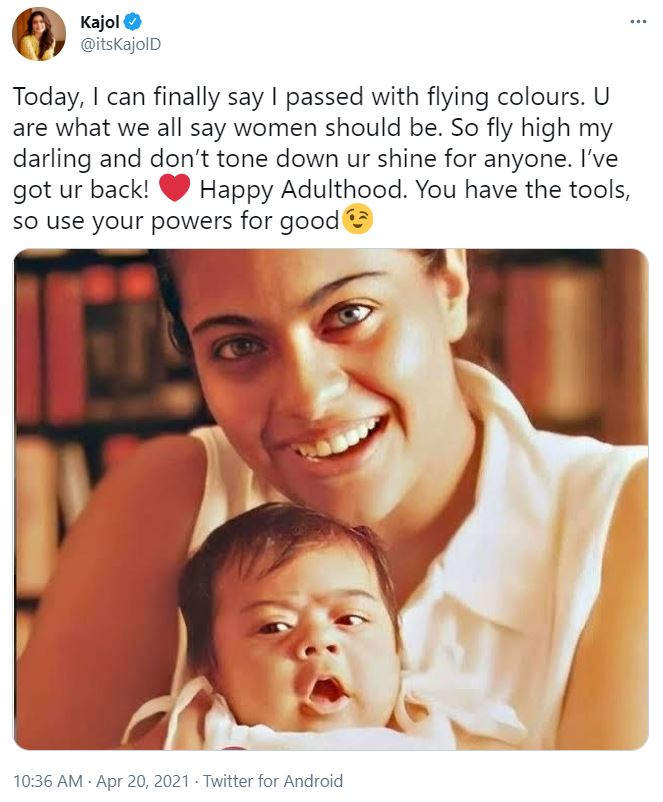 Ajay and Kajol, who first met on the sets of ‘Hulchul’, tied the knot in 1999. The couple welcomed their daughter Nysa in 2003 and their son Yug was born in 2010.
The duo has starred in films including ‘Raju Chacha’, ‘U Me Aur Hum’, ‘Ishq’ among others. The power couple was last seen together in ‘Taanaji: The Unsung Warrior.’ Ajay recently produced ‘Helicopter Eela’, which featured Kajol in the lead role.
Meanwhile, Ajay recently announced a new film titled ‘Gobar’, which he will co-produce with Siddharth Roy Kapur and will be directed by Sabal Shekhawat. He will also be seen in the much-talked-about movie ‘RRR’ and the Alia Bhatt starrer, ‘Gangubai Kathiawadi’. (ANI)