New Delhi [India], April 19 (ANI): Bollywood star Kangana Ranaut, on Monday, celebrated her parents’ wedding anniversary by sharing a picture of them on her social media and narrating the story of how they met.
The ‘Queen’ actor took to her Twitter handle and shared a rare throwback picture of her parents from their wedding day along with a heartfelt note that read, “Today is the wedding anniversary of my parents, growing up they lied to us that it was a conventional arranged marriage it’s only much later nani told us they had a raging affair, papa saw mom at a bus stand returning from college, took that bus every day till she noticed him.” 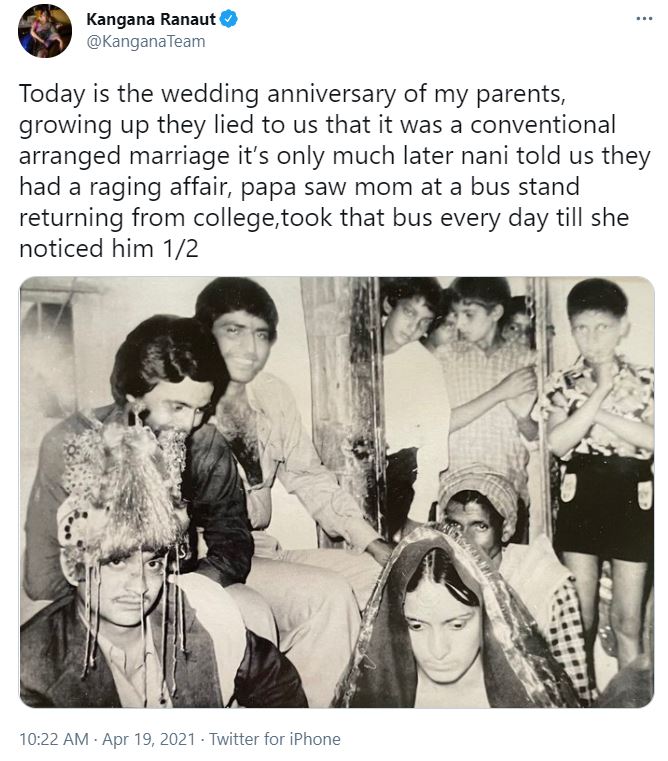 Narrating her parents, Asha Ranaut and Amardeep Ranaut’s love story, in a subsequent tweet she elaborated, “Papa saw mom at a bus stand returning from college, took that bus every day till she noticed him. When papa sent proposal, Nana ji (grandfather) brutally rejected cos papa didn’t have good reputation. Nana had selected a groom with government job for mom. She was his favourite and lovingly called her Guddi but mom fought all odds and convinced Nana. Thanks for that, happy anniversary.” 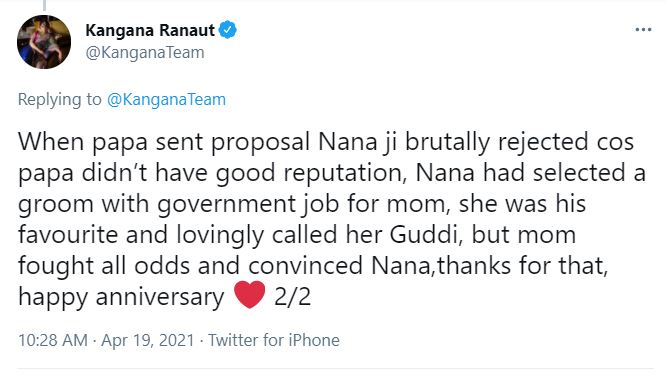 Meanwhile, on the work front, Kangana’s much-awaited project ‘Thalaivi’ which was slated to get a theatrical release on April 23, this year got postponed due to the rise in the number of COVID-19 cases in India. Apart from this she also has ‘Tejas’, ‘Dhaakad’, and ‘Manikarnika Returns: The Legend Of Didda’ in the pipeline.
Kangana has also signed up to play the role of former Prime Minister Indira Gandhi in an upcoming political drama. (ANI)