Mumbai (Maharashtra) [India], February 11 (ANI): As Bollywood megastar Sanjay Dutt and his wife Maanayata Dutt ringed in their 13th wedding anniversary on Thursday, Maanayata shared a never-seen-before picture of the couple and penned down a heart-warming note to mark the occasion.
The mother-of-two took to Instagram and shared a picture featuring herself and the veteran actor. The photo sees the duo dressed in traditional attires, and their heads are covered with a red holy cloth adorned with golden frills and detailing. The couple can be seen smiling as they pose for a happy picture.
Penning down an adorably sweet note for her doting husband, Maanayata wrote, “Another year of fully accepting the dark and the light within each other…another year of holding on together……happy anniversary to my best grip in this world.” 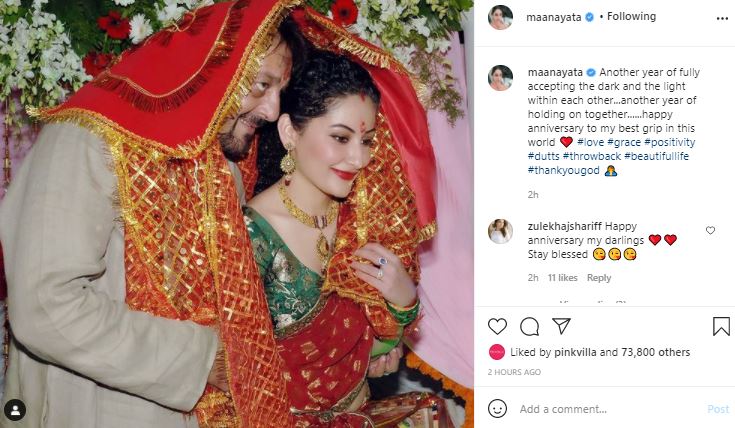 Earlier in the day, the ‘Khalnayak’ star shared a celebratory post on the photo-sharing application and marked the occasion. In his heartfelt post, Sanjay wrote, “11.02.2008 Loved you then. Love you even more now @maanayata. Happy anniversary.”

Scores of fans chimed into the comments section to send warm wishes on the much-in-love couple’s wedding anniversary. The duo tied the knot in 2008 and are proud parents to twins — daughter Iqra Dutt and son Shahraan Dutt.
Meanwhile, on the work front, Sanjay was last seen in ‘Sadak 2’, directed by Mahesh Bhatt. The movie was a sequel to the 1991 hit ‘Sadak’, which starred him with Pooja Bhatt. He will next be seen in Yash Raj Films’ ‘Shamshera’ alongside Ranbir Kapoor. (ANI)