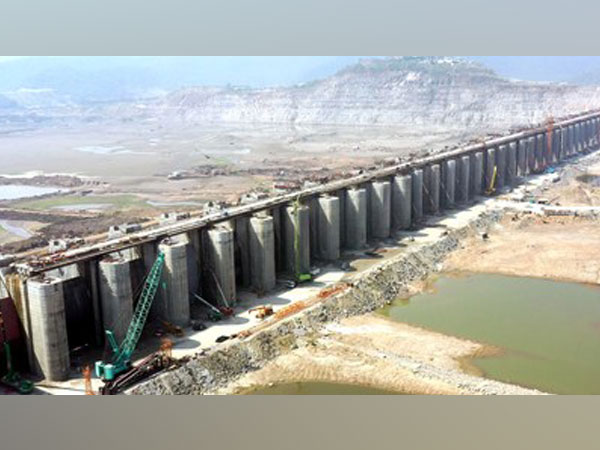 Polavaram (Andhra Pradesh) [India], February 11 (ANI/PRNewswire): One more milestone achieved today in Polavaram Project. The most critical and important part of the project, the Spillway pillers construction, has completed on Thursday. With this, the dreams of AP lifeline will soon be realised.
The government of AP is insisting on completing the project on schedule. Chief Minister, YS Jagan and the ministers are reviewing the project progress regularly and keep the works on a brisk pace. The execution agency, Megha Engineering and Infrastructures Limited (MEIL) working on three shifts, day and night, to complete the project.
It is an eventful day as the most challenging task in the prestigious national project, Polavaram, has completed. The spillway is useful to release the floodwaters, requires the construction of 52-metre-high pillars. The construction of ‘Fish Ladder’ in the second block of the spillway delayed the construction of the second pillar because of delays in approvals for its designs. With the approval of all the designs recently, MEIL has completed the construction of all the pillars to a slab level of an average height of 52 meters. Bridge slab works on spillway pillars is near completion.
Satish Babu Angara, General Manager, MEIL said that “We are happy to announce the construction of 52 pillars at 52 meters height in Polavaram Project has been completed. We also built the second pillar to a height of 52 meters as soon as the design required for the installation of the fish ladder approved. This completes the construction of 52 pillars on the Polavaram Project Spillway. We have faced heavy rains, floods, disruptions like COVID-19. In these challenging conditions also, we are able to complete the works as per the schedule. Working tirelessly to complete the construction of the project on time as planned by the government. We are confident to reach the goal.”
MEIL has begun the Polavaram Project concrete works on November 21, 2019, and ever since working on the day and night shifts. The spillway bridge slab length is 1128 meters, and 1095 meters have already completed. Out of 192 girders to be placed on the spillway pillars, MEIL already installed 188 girders on the pillars. Only four girders are to be placed on the pillars. Megha Engineering has completed the spillway works less than four months of record time. The spillway bridge slab concreting works launched September 9, 2020. In July 2020, it began installing girders on spillway pillars. 45 Numbers of slab completed on the spillway bridge and the remaining three slabs are ready to be completed in a short time. A total of 49 Trunnian beams have been completed and installed 28 gates on the Spillway Bridge. The total number of gates is 48 in this project. Platform arrangements for fitting the cylinders and power packs to the gates are underway. With the completion of spillway works, will soon realise the AP dream project.
The AP government and the MEIL committed to fulfilling the decades-old dream. The project to complete during YS Jagan’s regime, and will unveil this massive project to provide irrigation and drinking water to the people.
This story is provided by PRNewswire. ANI will not be responsible in any way for the content of this article. (ANI/PRNewswire)

Biden to redirect USD 42.4 million assistance from Myanmar amid sanctions