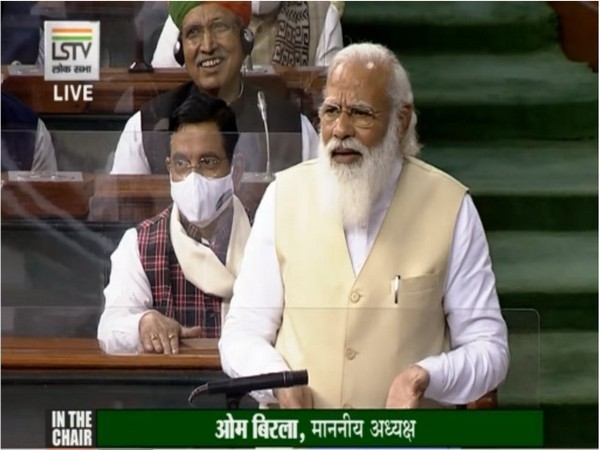 New Delhi [India], February 10 (ANI): Prime Minister Narendra Modi on Wednesday said that he considers the ‘Kisan Andolan’ as ‘pavitra’ (pious) and slammed the ‘Andolanjeevis’ for hijacking the protest.
“I consider the Kisan Andolan to be ‘pavitra’. The movement has importance in India’s democracy, but, when Andolanjeevis hijack protests, showcases photos of those jailed for serious offences, does it serve any purpose? Not allowing toll plazas to work, destroying telecom towers in Punjab. Does it serve pious protests,” PM Modi said in Lok Sabha during the reply to the Motion of Thanks on the President’s Address.
“The protesters have done the work of ruining the pious agitation of the farmers. Therefore, it is very important for people of the country to differentiate between “andolankari” and “andolanjeevi,” he added.
Congress and TMC MPs walked out of the House during PM Narendra Modi’s reply in Lok Sabha to the Motion of Thanks on the President’s Address.
“We walked out because PM didn’t discuss our concerns over farmers’ death. He agreed that amendments are required in farm laws, some states will be benefitted and some’ won’t. Why do you have to bring laws that won’t be benefitting everyone?,” Congress leader Adhir Chowdhury told media.
While commenting upon the walkout by Opposition MPs, PM Modi said, ” There are people who talk the right things. But this same section, when it comes to doing the right things, fail to convert words into action. Those who talk big on electoral reforms oppose the One Nation One Election. They speak of gender justice but oppose Triple Talaq.”

Defending the farm laws, Prime Minister Narendra Modi said, “We can’t meet challenges of agriculture sector in 21st century with thinking of 18th century. We will have to change it. Nobody wants farmers to stay stuck in the cycle of poverty, that he doesn’t get right to live. I believe farmers shouldn’t be dependent on others. It is our responsibility.”
Noting that the process of reforms in agriculture is necessary and important, Prime Minister said that the new farm laws provide an option to farmers and have been brought to meet the emerging challenges.
Prime Minister said no mandis have been shut after the implementation of these laws and there has been no impact on the minimum support price.
The Prime Minister accused the opposition of misleading farmers protesting against farm laws.
“Congress MPs in House debated on the colour of the laws. It would have been better if they had debated on the content and intent of the laws. Let us understand, as far as the protests are concerned, our farmer brothers at Delhi borders have been a victim of rumours, propaganda and confusion,” he said.
PM Modi said that the Parliament and the government respect the “sentiments of all agitating farmers”.
“This House, our government, and we all respect the farmers who are voicing their views on the farm bills. This is the reason why topmost Ministers of the Government are constantly talking to them. There is great respect for the farmers,” he added.
He said the new farm laws provide alternatives to farmers.
“I want to ask has anything been snatched that was available earlier? What has happened is an alternative option has been provided. That is the arrangement under the new laws,” he said. (ANI)