Salman Khan gets relief in Blackbuck poaching case, pens note of thanks for fans

New Delhi [India], February 12 (ANI): After getting relief in the alleged false affidavit presentation case from the Jodhpur District and Sessions Court on Thursday, Bollywood superstar Salman Khan extended his vote of thanks to fans for supporting and loving him throughout his tough days.
Khan hopped on to his social media accounts and shared a debonair picture of himself on Friday. Donning a dashing black blazer suit, the actor looked handsome.
With the post he wrote, “To all my fans.. thank u for your love support n concern. Khayal rakho apna n parivaar ka (Take care of yourself and your family). God bless n loveee u,” he captioned the post. 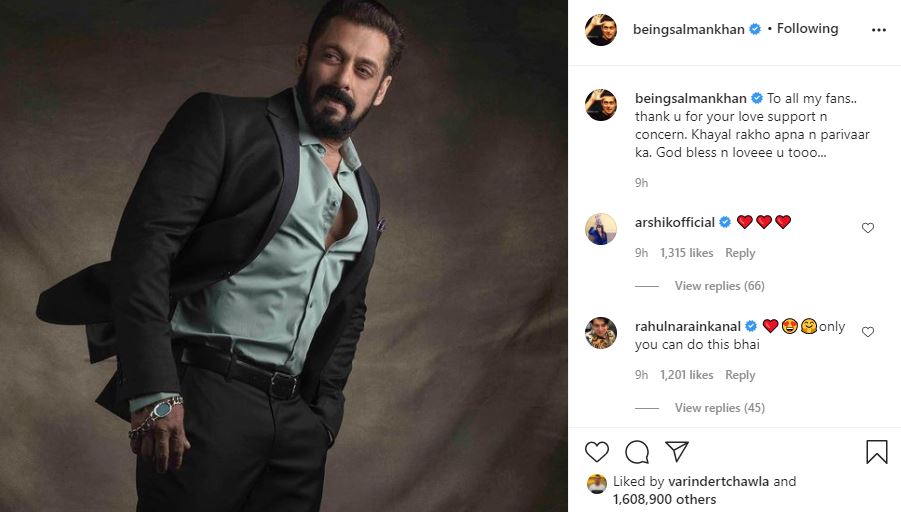 With the post hitting the photo-sharing platform, it garnered more than 1 million likes while scores of the ‘ Bajrangi Bhaijaan’ star’s fans chimed into the comments section and left lovestruck messages for him.
This post came after the Jodhpur District and Sessions Court dismissed a petition filed by the Rajasthan government that alleged Salman Khan for presenting a false affidavit related to the Arms Act in the blackbuck poaching case.
The petition stated that Khan said that his arms licence has been lost. However, the investigation revealed that the actor has submitted it for renewal in Mumbai’s Bandra.
While on the other hand, another PIL earlier stated that the actor had submitted an affidavit citing the reason for not appearing to the court, which is an ache in his ear but he was found busy in shooting. However, the trial court has earlier quashed both of the petitions.
The lawyer representing the government said, “We have not received the copy of judgment yet. After receiving it we will think to take the matter to the High Court.”
Salman Khan was booked under Section 51 of the Wildlife Protection Act for poaching two chinkaras in Bhawad village on 26-27 September 1998 and one chinkara in Mathania on September 28, 1998. (ANI)

Haryana DIG arrives at police station, to be probed after spat with Home Minister's brother

Flipkart to boost growth of small-scale businesses in Maharashtra