New Delhi [India], April 21 (ANI): Keeping up with the promise of an Eid release, Bollywood superstar Salman Khan’s movie ‘Radhe: Your Most Wanted Bhai’ is all set to make it to the theatres and digital platforms on May 13. The trailer of the film is slated to drop tomorrow.
The digital release of ‘Radhe: Your Most Wanted Bhai’, however, won’t be available for free. The makers have taken the pay-per-view route, which means that the audience will have to pay a certain amount to watch the movie at their homes. This would not be a part of their subscription to OTT platforms.
The makers of the film, on Wednesday, shared the mega release plan on their Instagram handle, along with a poster of the upcoming movie. They wrote, “The perfect Eid celebration! #Radhe: Your Most Wanted Bhai, releasing simultaneously on multiple platforms worldwide. #RadheThisEid.” 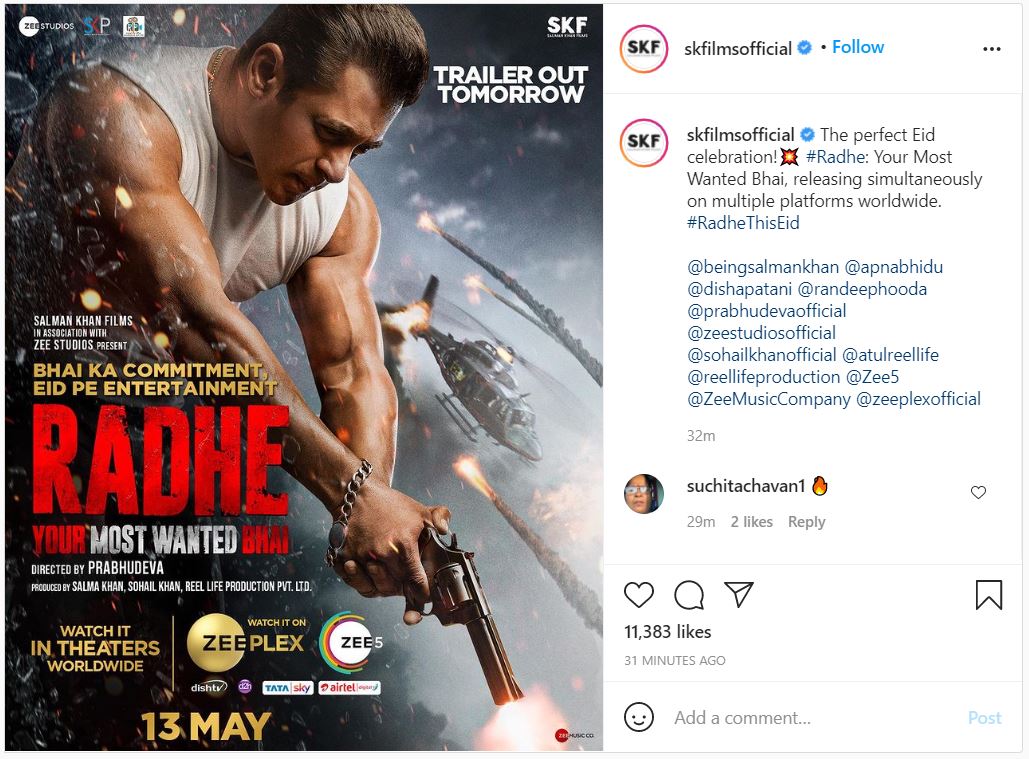 Film critic and movie trade analyst Taran Adarsh also confirmed the same on his Twitter handle by tweeting, “#RADHE IN CINEMAS AND DIGITAL MEDIUMS ON SAME DAY… #SalmanKhan’s #Radhe will release simultaneously in cinemas and digital mediums [pay per view] on 13 May 2021… Trailer drops tomorrow.” 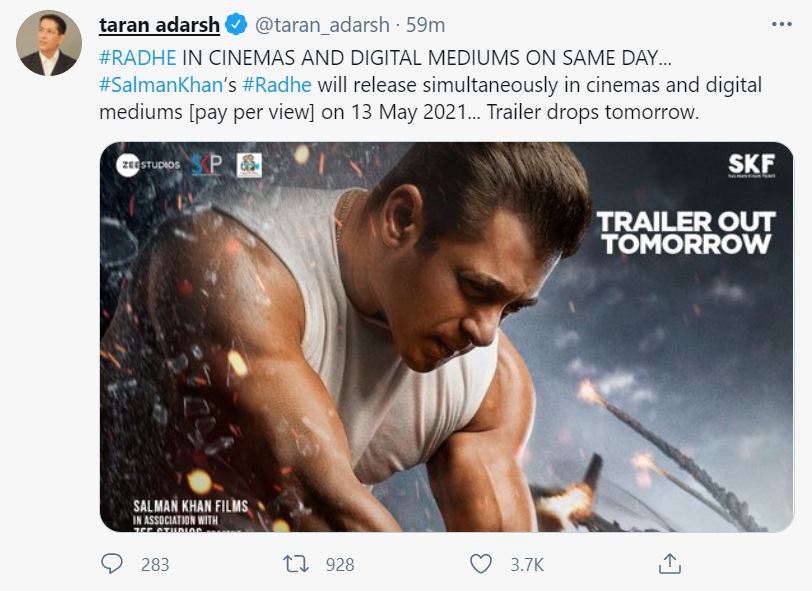 ZEE Studios will be the first studio in India to be adopting a multi-format release worldwide. Speaking on this Shariq Patel, CBO, Zee Studios shared, “The ongoing pandemic forced us to innovate, and we are proud to be the first to embark upon this new distribution strategy. While we all love to catch the latest movies at the nearest theatres, we realized we’d be doing a disservice to Salman’s fans nationwide if we aren’t able to release theatrically in all Indian states. We sensed the need for a pay-per-view solution along with theatres, which gives the consumers flexibility and convenience of viewing the film.”
He further continued, “There cannot be a better film than Radhe to offer the audiences who’ve been waiting for an out and out entertainer for over a year now. Radhe continues our network’s deep relationship with Salman Khan and we are looking to release the film in over 40 countries including theatrical release in major overseas markets.”
Salman Khan Films’ spokesperson added, “It’s imperative that we all come together and think of out-of-the-box solutions for cinema as an industry during the current pandemic situation. We will support the theatre owners by releasing the film in as many theatres as we can, keeping in line with the rules and protocols laid down by the government. But, considering the guidelines and safety measures, we also need to devise ways to ensure that the film reaches all of our audience. We don’t want to deny the audience the choice of entertainment in the comfort of their homes during these times.”
The film will be released on ZEE’s pay-per-view service ZEEPlex which rests on India’s leading OTT platform ZEE5 and also on all leading DTH operators. The actor, along with his studio partner Zee Studios, have opted for this hybrid release model given the rise in coronavirus cases across the country.
‘Radhe: Your Most Wanted Bhai’ will also have a theatrical release and will be available in theaters in all Indian states where the theaters are operational as per COVID protocols. A wide international theatrical release targeting 40 countries across all international territories is also being planned. It will be the first Bollywood film to release theatrically in the UK since the lockdown last year.
The action flick by the Yash Raj Films banner, directed by Prabhudeva, was earlier scheduled to release on Eid 2020, but it could not see the light of the day due to the closing of film theatres owing to coronavirus-induced lockdown.
The movie will see Salman Khan romancing Disha Patani. The flick also features Jackie Shroff and Randeep Hooda.
‘Radhe’ is co-produced by Salman Khan, Sohail Khan, and Atul Agnihotri under the banners Salman Khan Films, in association with Zee Studios, Sohail Khan Productions, and Reel Life Production. (ANI)