Mumbai (Maharashtra) [India], February 11 (ANI): Sanjay Dutt on Thursday marked the thirteenth wedding anniversary as he penned a sweet note to wife Maanayata Dutt.
The ‘Kaante’ star hopped on to Instagram and shared a picture with Maanayata in which the duo is seen twinning in black ensembles. 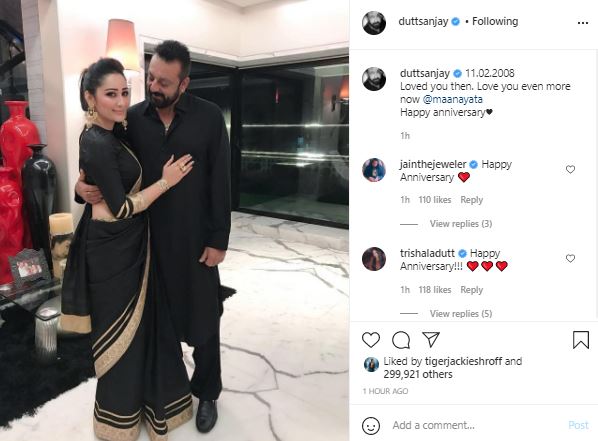 In his heart-warming note on the special occasion, Dutt wrote, “11.02.2008Loved you then. Love you even more now @maanayata. Happy anniversary (red heart emoticon).”
Celebrity followers including Tiger Shroff and more than 2 lakh fans liked the post within an hour of its being posted.
Scores of fans chimed into the comments section to send warm wishes on the wedding anniversary.
The couple got married in 2008.
They share 9-year-old twins daughter Iqra Dutt and son Shahraan Dutt.
On the work front, the actor was last seen in Alia Bhatt and Aditya Roy Kapoor co-starrer ‘Sadak 2.’ He will be seen in a series of films which include, ‘KGF: Chapter 2’ and ‘Bhuj: The Pride of India,’ ‘Shamshera’ and ‘Prithviraj’. (ANI)