The exhibition traced the journey of democratic tradition in the country, right from Vedic Times, through the Lichchavi Republic to the making of modern India. 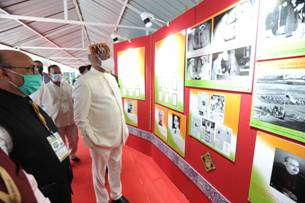 New Delhi : Even as India celebrated the 71st Constitution Day, a special exhibition on the Constitution Day at Kevadia in Gujarat, drew appreciation of Parliamentarians and Legislators.

This exhibition, organized by the Bureau of Outreach Communication of Ministry of Information & Broadcasting in collaboration with the Parliamentary Museum and Archives, as part of the 80th All India Conference of Presiding Officers at the Statue of Unity site in Gujarat, was inaugurated by the speaker of the Lok Sabha,  Om Birla on Wednesday.

The speaker appreciated the use of multi-media and said interactive exhibitions make information dissemination interesting. He said, the exhibition effectively captures the chronology of the framing of the Constitution and such exhibition should be taken to different parts of the country to create awareness about our democratic tradition.

TDS is the way to Success for any Entrepreneur : Mandeep Singh Pahwa