Spent my life fighting for lawyers, getting justice for the public: Adv. Sanjeev Nasiar

Sanjeev Nasiar spoke on a wide range of issues including security issues of city advocates and discordant relationship between Delhi Police and lawyers during the interview. Nasiar also informed about  work initiated by him for the welfare of advocates and how he is committed to ensuring advocates' welfare. 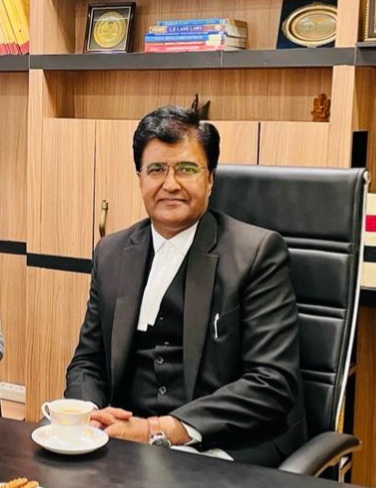 The president of Delhi Bar Association (Tis Hazari Courts) and co-chairman of the Bar Council of Delhi, advocate Sanjeev Nasiar in an interview to TOP STORY, stresses on the need for having some kind of a financial scheme to support law fraternity in case of emergency as pandemic.

He spoke on a wide range of issues including security issues of city advocates and discordant relationship between Delhi Police and lawyers during the interview. Nasiar also informed about  work initiated by him for the welfare of advocates and how he is committed to ensuring advocates’ welfare.

Nasiar is also the president of the AAP’s legal cell and spokesperson. Senior journalists Rakesh Rawat and Abhishek Kumar Byahut spoke to him about his three decades long legal profession and political career.

Q: How long have you been associated with the legal profession? Can you please explain in detail.

A:  I have been working as an advocate in Delhi since 1988. After doing B.Com, I went to Indore to prepare for chartered accountancy  but I had no interest in this  subject. Then, I studied law in Indore itself. My father was also a good lawyer in Haryana but I decided to practice at Delhi’s Tis Hazari Court. I faced many difficulties in the beginning. However, I focused on my practice for nine years and understood the nuances of the law. Tis Hazari used to be the only  big court at that time. The entire civil court of Delhi used to run from there. During practice, I realised the problem of advocates in the court premises as I was being associated with student politics. And then, I inclined toward Bar Association politics.

A:  I was elected as the secretary of the Bar Association in the year 2003. I had many challenges. Since 2003, there has been no proper place for lawyers to sit in the Tis Hazari Court Complex. Bar rooms were there but there was no arrangement for seating. Lawyers used to sit in the dirt. There was no arrangement for drinking water and urinals. At that time I vowed that I would survive only by creating a better environment for lawyers inside the court complex. I renovated the hall of the court with a central air conditioner. I also ensured drinking water and urinal facilities in the court premises.

Q: You worked with the BJP for a long time and  joined the AAP in the year 2020. What was the reason behind leaving the BJP!

A:  I worked with the BJP for about 30 years. During the politics of the Bar Association, I worked hard for the welfare of the lawyers and created a better environment for them. The then chief minister of Delhi, Sahib Singh Verma ji, extended full cooperation to all of us from time to time.

I had a dream that there should be a financial scheme for the lawyers so that we would be able to empower them financially and socially in case of emergency. To fulfill this dream, I always raised  this demand with the  BJP but the current leadership in BJP did not help us. In 2019, when I was contesting the election of the Bar Association, a junior advocate was shot at during a clash between advocates and the police. By the grace of God his life was saved. At that time BJP did not help us and supported Delhi Police. Since then anger and resentment grew against the  BJP.  so I resigned from the BJP.

We felt that there should be some leader who would listen to us. Arvind Kejriwal was the chief minister of Delhi at that time. Many of our leaders used to go with their demands to  Kejriwal who assured us. I also met Kejriwal Ji for the first time after being elected the  president of the Delhi Bar Association. I told him that we want that the promise you have made to the lawyers should be addressed. He gave me 100 percent assurance. Then, I joined the AAP to help our law fraternity.

Q.  What made you decided to join the AAP. You are the president of the AAP’s legal cell and also a spokesperson. What are you doing to strengthen the party?

A. When I joined the party, Kejriwal ji had said that Sanjeev, I want the legal cell of my party to be strong. Today I can confidently tell you that the AAP  has the strongest legal cell in Delhi. In November 2021, we had called a big conference that thousands of lawyers had attended. We have been giving free legal aid on behalf of the party in different areas. I was impressed  Kejriwal Ji on a few counts. Today if any state government  has given any facility to a common man, that is Delhi government.  Today electricity is the cheapest in Delhi. Apart from a rebate in electricity rate, 200 units of electricity are given free of cost. Water is the cheapest. Free travel service is provided to women and labourers in DTC buses. In the field of education and health, the government is being appreciated all over the country and abroad.

In spite of so many facilities, there has been no tax hike. There is an honest government in Delhi. I was very much impressed by his honesty. He does not talk about caste/ religion and he only talks about people’s problems. The outlook of Delhi has changed. I believe that the government of any state should do only two things- better health facilities and quality education.

Kejriwal Ji is working. That’s why today the people of Punjab have given him mandate .

Q.  The incidents of firing, blast and ruckus between the lawyers and the police personnel have raised serious questions over the security concern of city courts. How do you see such things?

A.  The security of the court is really a matter of concern for the Delhi Bar association as the lawyers, clients, witnesses, judges, journalists as well as criminals and police personnel visit the court every day. The city courts have also witnessed the incidents of gang war and IED blasts. To strengthen the security, a committee has been formed by the Supreme Court at the organisational level. Some incidents did  not happened suddenly. They were planned in advance. We are very much worried about the security of lawyers and judges in such a situation. We have made some decisions after several rounds of meetings with the government officials. We want to strengthen the security.

Q:  Some incidents of  fight between the lawyers and police personnel in the last few years show that there is a lack of harmony between the police and the lawyers. Why?  What steps  have you taken to prevent such incidents?

A:  See, the incidents of the fight between lawyers and Delhi police personnel are unfortunate. Such incidents should not have  happened  at all. I don’t support it at all. We have also taken action from time to time. A delegation from the Bar Council of Delhi had a meeting with the Commissioner of Delhi Police. A monitoring committee has been formed at the commissioner level in which DCP and members of the Delhi Bar Council are members so that there could not be any dispute between the police and the lawyer. If there is any dispute, this committee takes immediate action.

Q:  The court remained closed for two years during the Corona period. The financial condition of the lawyers was not very good. Have you and the government together taken any step to financially help the lawyers?

We also helped to provide medical facilities to the lawyers who had  covid infection. We couldn’t support the lawyers outside Delhi as many colleagues have not been able to become a member of the CM Welfare Scheme. This scheme barred the residents of NCR. The lawyers of Delhi got Rs 10 lakh for his family members and Rs 5 Lakh was given to the other lawyers’ family members. Thousands of companions have been helped financially by Delhi Bar , the Bar Council of Delhi and the Delhi government. They are committed to extending such help even further.

Q:   The AAP has nominated you as a councillor  in South Delhi. If the party makes you a candidate for the election of MLA or MP in the coming time, will you contest?

A:  In the last 34 years of my career, I have only asked for leadership from the Delhi Bar Association. I worked in BJP but I never made any claim there. Currently, I am working with Kejriwal Ji . He made me the spokesperson of the party and also nominated a councillor member in SDMC. I have full faith in my leader. Whatever responsibility he gives me, I will happily accept it.

Q:  How does the Delhi Bar associations help newly enrolled lawyers during the beginning of practice?

A:  The Bar Association is formed for the welfare of lawyers. Along with schemes, there are many things involved to benefit the advocates. When lawyers come to practice, we share the practical information about the court with them. Along with this, the Bar Association takes its decision on all the issues related to the welfare of lawyers. At the same time, there is a disciplinary committee in the Delhi Bar Council which takes action against any complaint.