The ‘Agnibaaz Brigade’ roaring riders were flagged in New Delhi 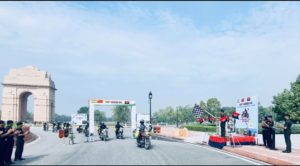 The objective of this expedition was to inculcate a sense of pride and achievement amongst all ranks of the Indian Artillery, promote camaraderie, leadership and strengthen the spirit of adventure amongst soldiers and students. The expedition further sought to project the image of Indian Army and the contribution of Regiment of Artillery in various wars and campaigns.

The expedition was a combination of two adventure activities, biking & trekking, covering distance of 3000 kms over 12 days along with Swachhta Abhiyaan and Motivational Drive for school students to motivate them to join the Armed forces . The team trekked the peaks of Mount Kalsubai, Mount Girnar & Guru Shikhar the highest peak of Maharashtra, Gujarat and Rajasthan respectively. During the expedition, the team also carried out Swachh Bharat Awareness Abhiyaan at these three heights, including cleanliness drive.