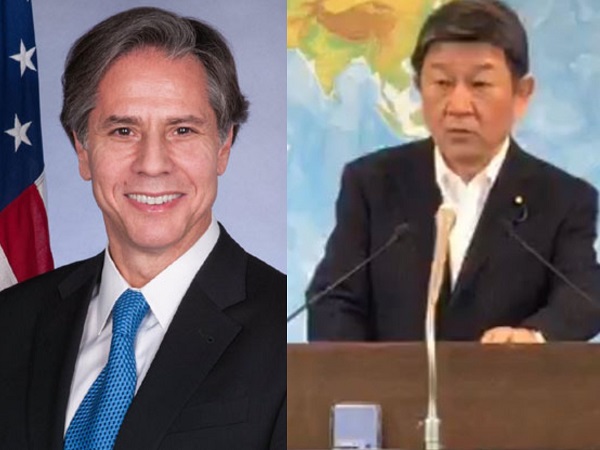 Washington [US], February 11 (ANI): The United States stands with the people of Myanmar and support their right to peacefully assemble, including the right to protest peacefully in support of the democratically elected government, said Secretary of State Antony Blinken on Wednesday (local time).
Blinken was speaking to Japanese Foreign Minister Toshimitsu Motegi. During the call, the Secretary and the Foreign Minister discussed ways to strengthen cooperation with allies and partners to address the military coup in Burma.
“We stand with the people of Burma and support their right to peacefully assemble, including the right to protest peacefully in support of the democratically elected government,” US State Department spokesperson Ned Price said quoting Blinken during a press briefing.
However, Secretary Blinken expressed concern over the military coup and the importance of rule of law and the democratic process in Burma.
The conversation between Blinken and Motegi comes after US President Joe Biden signed an executive order imposing sanctions on the leaders of the military coup in Myanmar.
“Today, I am announcing a series of actions that we are taking to begin imposing consequences on the leaders of the coup. The US government is taking steps to prevent the generals from improperly having access to the 1 billion dollars in Burmese (Myanmar) government funds held in the United States and today I have approved a new executive order, enabling us to immediately sanction the military leaders who directed the coup, their business interests and their family members,” the US President said at the White House.
Biden further said that Washington will identify the first round of targets this week and will also impose strong export controls, along with freezing US assets that benefit the Myanmar government while maintaining support for healthcare, civil society groups and other areas benefitting the people of Myanmar directly.
The President also condemned violence against demonstrators protesting against the coup and called it ‘unacceptable’. He also said that the US is ready to impose additional measures and will work with its international partners to urge other nations to join them in these efforts.
“I also call on the Burmese military to immediately release the democratic political leaders and activists and they’re detained including Aung San Suu Kyi and Win Myint, the President. The military must relinquish the power it seized and demonstrate respect for the will of the people of Burma as expressed in their November 8 elections,” Biden said in his remarks.
Myanmar’s military launched a coup on February 1 and detained State Counsellor Aung San Suu Kyi, Win Myint and other National League for Democracy (NLD) members.
The military also announced a one-year state of emergency in the country, vowing to “take action” against alleged voter fraud during the November 8 general election, which saw Suu Kyi’s NLD party secure a resounding victory.
Police forces on Tuesday cracked down on protesters by arresting over 100 demonstrators and firing live rounds and riot control weapons that led to serious injuries.
Police and military personnel on Tuesday night raided the headquarters of the NLD in Yangon, reported NHK World. (ANI)