Voters of Delhi link their Aadhaar Number with their Voter ID : Ranbir Singh

-The CEO, Delhi, Dr. Ranbir Singh today briefed the recognized political parities about the amendments made in the electoral laws 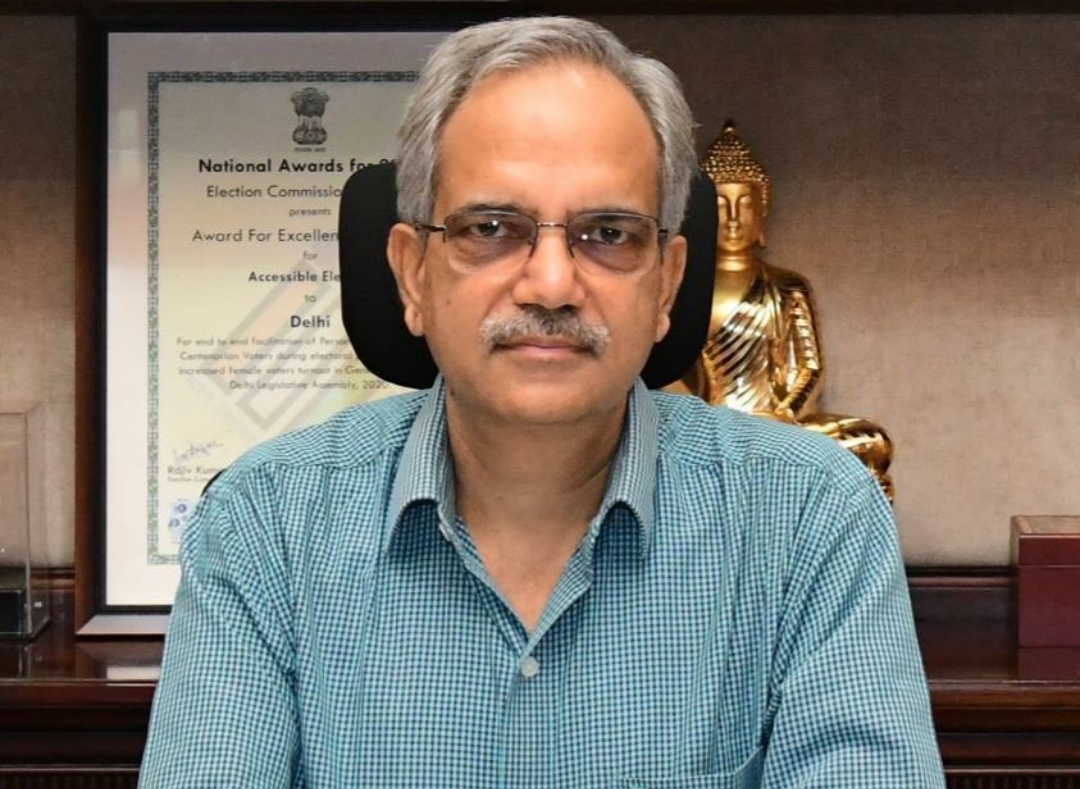 New Delhi : The Chief Electoral Officer (CEO), Delhi, Dr. Ranbir Singh today called upon all the citizens of Delhi to link their Aadhaar Number with their Voter ID. The primary objective of the programme is to establish the identity of electors and authentication of entries in electoral roll. An elector can submit his/ her Aadhaar number through both online and offline methods. Every person whose name is listed in the electoral roll may intimate his Aadhaar number to the electoral registration officer in Form 6B in accordance with sub-section (5) of section 23 of the Act, informed Delhi CEO, Dr. Ranbir Singh. Special Camps shall be organized at the booth levels in all assembly constituencies to facilitate the voter to link their Aadhaar numbers with voter ID .

​​
The CEO, Delhi, Dr. Ranbir Singh today briefed all recognized political parities about the amendments in the law and the steps taken by the Office of The Chief Electoral Officer to disseminate information and spread awareness about the linking of Aadhaar with Voter ID card. CEO, Delhi also informed that Special Camps shall be organized at the booth levels in all assembly constituencies. He also informed the political parties about the new application forms and the 4 quarterly qualifying dates under the amended law.

The CEO informed that the new voters who have not enrolled for their voter identity card, can enroll along with their Aadhaar Card as well as existing voters who have already enrolled in the voting list can also add their Aadhaar Card with their Voter Identity Card voluntarily. The programme shall be completed by 1st Apri, 2023. Efforts will be made to contact 100% electors registered in the electoral roll to assist them in submitting Form 6B.

The Ministry of Law & Justice has amended the Representation of the People Act, 1950 and the Representation of the People Act, 1951 vide the Election Laws (Amendments) Act, 2021 dated 30th December, 2021. The amendments in the said Acts broadly cover the use of Aadhaar for electoral registration purpose, multiple qualifying dates, gender neutral provision for service and special electors and power to acquire premises for the purpose of conduct of elections. Further, the Ministry of Law & Justice has notified the 1st August, 2022 as the date on which the Election Laws (Amendment) Act, 2021 shall come into force.

Amendments in application forms:-
​​In order to make the forms for registration of electors user-friendly for convenience of the electors, Form 6, 7, 8 have been modified and a new Form 6B has been introduced for collection of Aadhaar Data of the electors. Important fundamental changes inter alia are given below:-
Form-6: Registration of new voters/electors, Form-7: Objection for proposed inclusion/deletion of name in the existing Electoral Roll , Form-8: Shifting of Residence within or outside the assembly constituency/Correction of entries in existing electoral roll/Replacement of EPIC and Marking of Person with Disability, Form-6B: The new form introduced w.e.f. 01st August, 2022, for collecting Aadhaar number of existing electors to authenticate the entries in the electoral rolls and thus make it absolutely error-free.

1st April, 2023 is the date on or before which every person whose name is included in the electoral roll may intimate his Aadhaar number in accordance with Section 23 of the Representation of the People Act, 1950. Furnishing of Aadhaar number is purely voluntary.

​Dr. Ranbir Singh further informed that the collection of Aadhaar Number from the Electors is on voluntary basis. Every person whose name is listed in the roll may intimate his Aadhaar number to the Registration Officer in Form 6B in accordance with Sub-Section (5) of Section 23 of the Act. The programme for collection of Aadhaar Data of existing electors has been launched today i.e from 1st August, 2022. Form 6B will be available on the ECI/ CEO Website and on GARUDA, NVSP, VHA etc. for online filling of Aadhaar.

It has been emphasized that while handling Aadhaar number of the applicants, the provision under Section 37 of Aadhaar (Targeted Delivery of Financial and other Subsidies, Benefits and Services), Act 2016 shall be adhered to. Under no circumstances shall Aadhaar number go public. If the electors’ information is required to bet put for public display, the Aadhaar details shall be removed or masked.

Dr. Ranbir Singh said that, “an elector can submit Form 6B to link his / her Aadhaar number through online. For Online Submission, Elector may fill Form 6B on elector-facing apps/ portal like NVSP and VHA either through self-authentication (using OTP to be received on the mobile number linked with Aadhaar) or submit Form 6B without self-authentication, with necessary attachments. For Offline Submission, the EROs shall deploy BLOs for House-to-House visit for collection of Aadhaar numbers in the hard copy of Form 6B. All offline submission of Form 6B shall be digitized by BLOs using GARUDA or by ERO using ERONET, within 7 days of the receipt of the Forms.”

The CEO further informed that the Special Camps will be organized at the booth levels in all assembly constituencies to convince all the electors for submission of Aadhar number. The ERO shall not delete any entry in the electoral roll on the ground of inability on the part of any existing elector to furnish/ intimate Aadhaar number.

In case, the elector does not have the Aadhaar number, then he/ she will be asked to submit a copy of any of the eleven alternative documents, mentioned in Form 6B namely MGNREGA Job Card, Passbook with photograph issued by banks/post office, Health Insurance Smart Card issued under the scheme of Ministry of Labour, Driving License, PAN Card, Smart Card issued by RGI under NPR, Indian Passport, Pension Document with photograph, Service Identity card issued to employees by Central/ State Govt./ PSUs Public Limited Companies, Official Identity Card issued to MPs/MLAs/MLCs. Unique Identity ID(UDID) Card, issued by Ministry of Social Justice & Empowerment, Govt. of India.