Notably for the first time in over six decades the Zoji la Pass, on NH-1 faced a closure for only 73 days, as against an average of 150 days. 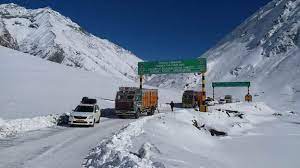 New Delhi:  Zoji la Pass has been opened for civilian traffic on March 25, 2022 as  the first civilian convoy comprising 560 vehicles carrying fresh supplies, medicines and other essential items and passenger vehicles crossed over to Ladakh from Sonamarg.

The  Border Roads Organisation (BRO) established the unprecedented breakthrough on the gateway connect between Union Territories of Ladakh and Jammu & Kashmir on 19 Mar 2022 when the first Trial Convoy was flagged off by DGBR, Lt Gen Rajeev Chaudhry from Zoji la to Ladakh.

Notably for the first time in over six decades the Zoji la Pass, on NH-1 faced a closure for only 73 days, as against an average of 150 days. Known as the “Mountain Pass of Blizzards”, Zoji la is located in Drass, Ladakh at an altitude above 11,650 ft and historically remains closed for the major part of the winter season.

This year BRO kept it open till 04 Jan 22, a first ever accomplishment in the recorded history.  Various precautionary measures were put in place by BRO before the road was declared open for traffic. Since the road stretch has a large number of avalanche prone locations dedicated teams comprising lookout men along with heavy duty equipment have been prepositioned astride identified avalanche and accidents sites.